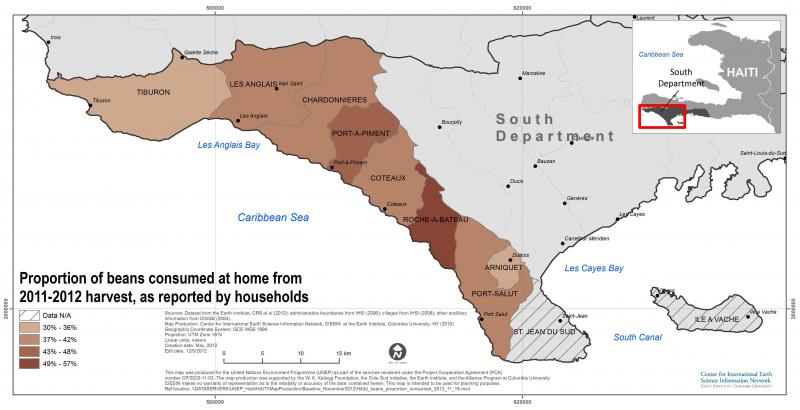 Download original image
« Back to galleryItem 33 of 33« Previous
Description:

The top five crops grown, in the order of the number of households reporting harvests in the past year, are: pigeon pea, maize, sorghum, plantain, and black bean.  The ranking of these crops varies within the ten communes, as potatoes, yam, manioc and peanut are also ranked in the top five in some communes.

Beans, on the other hand, seems to be the cash crop of the region. According to KPP, the market price for beans between 2011 and 2012 (Data obtained from the Konbit for Port-à-Piment website between March 2011 and February 2012) ranged between 130 and 225 HTG per marmite. Beans were reported as consumed by households at 40%, and sold at markets at 52%. Although labor intensive during harvest and processing, it is assumed that significant differences in prices between beans and other staple crops is a high enough economic incentive for households to continue planting beans. For more information please read the 10 commune baseline report here.