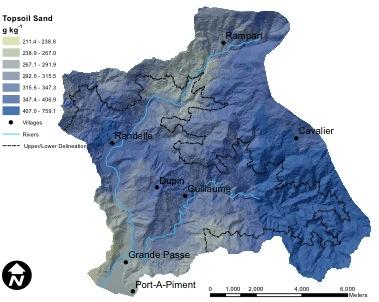 Download original image
« Back to galleryItem 3 of 22« Previous | Next »
Description:

Physical properties for the topsoil include the texture classified as sand, silt and clay.  The texture of most soils in the watershed was clay loam soil to 50 cm depth.  There were no differences in sand, silt or clay among LULC classes, and slope.  There was however significantly higher clay content in the upper watershed (P<0.05) and for soils on steep slopes both soils are considered to have clayey texture (Figures 47-50 in the LDSF Report). Clay loams have high water holding capacities but much of this water is not available to plants as the water is tightly bound in small pore spaces. Soils with higher clay content can have lower infiltration rates which in areas, such as this watershed, where rainfall events are often short and high in intensity, can result in ponding, increased runoff and erosion and flooding.