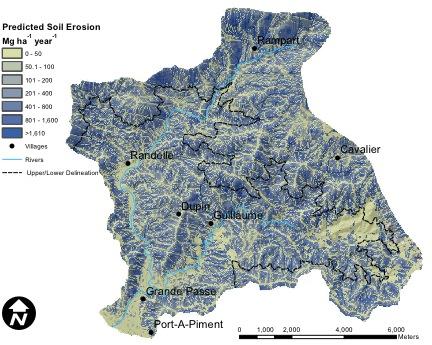 Download original image
« Back to galleryItem 6 of 22« Previous | Next »
Description:

Across the watershed the overall predicted rate of soil erosion was on average 504 Mg ha-1 year-1. The average value for the level slopes was 308 Mg ha-1 yr-1, and on moderate slopes 463 Mg ha-1 yr-1. On the steep slopes average predicted rates of erosion were 75% greater than those on level slopes with 542 Mg ha-1 yr-1.   These values are consistent with other estimates of the regions using the RUSLE model that predicted soil losses ranging from 75-500 Mg ha-1 yr-1. These average values however do not accurately predict the amount of soil losses that end up in waterways, deposition from one part of the watershed to another, or the risk of extreme erosion.  While soil erosion on the 14% of the level ground in the watershed may be near zero, and may actually be accumulating sediments, estimates of soil erosion were extremely high for the other areas of the landscape given the topography (slopes as high as 125%). These types of soil losses are unsustainable and need to be addressed with appropriate management to avoid continued crop yield reductions and loss of other ecosystem services.  Transitioning from annual crop production to cropping systems integrated with perennials is critical for preventing soil erosion. For the full report please click here.